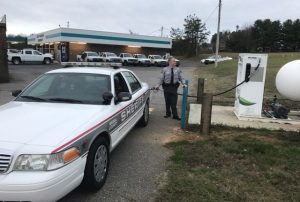 Iredell County Sheriff’s Office (ICSO) in North Carolina has converted 60 of its vehicles t
o bi-fuel propane autogas cars, saving enough in fuel costs to allow the Sheriff’s Office to fund other programs, according to a case study from the Propane Education & Research Council (PERC).

Emissions reductions initially attracted the ICSO to propane-autogas vehicles, but the county also saw propane autogas as a way to reduce its fuel budget when gasoline prices were soaring to more than $4 per gallon just before 2010. The county also liked that the alternative fuel would provide the fleet with fuel security required during emergency situations.

ICSO was able to offset conversion costs with grants from the North Carolina Clean Energy Technology Center. Even with lowered gas prices, propane autogas still costs 40-50% less than the cost of gasoline through use of a $0.36 federal alternative fuel tax credit for each gallon of propane autogas used.

Fuel security has already been put to the test. In the fall of 2016, a pipeline leak in Alabama disrupted gasoline supplies and drove up costs for existing fuel for two months. ICSO was less affected because the department could rely on propane autogas in its bi-fuel vehicles to continue regular operation.

The Sheriff’s Office dealt with initial skepticism of the new fuel from officers through training, and eventually they were eased knowing that there isn’t much of a difference when it comes to performance, maintenance, and refueling, according to the case study.

The county expects to add more propane autogas vehicles to its ICSO fleet.